A friend of mine has a family cattle ranch outside of Waco, Texas that has been overrun by hogs.  They have people running dogs, helicopter hunters, and trappers all working the property.  But several large, smart, boars had manged to evade the dogs, choppers and would not enter the traps.  So, naturally the question came up, “How would night vision and thermal do?”  Of course, there is only one answer, and that’s “Let’s find out!”

Now this ranch is several thousand acres, but there is one corner where all the grain bins, many hundred yard long feed-troughs, and several silage piles (the size of houses) are located, so there is no short supply of food for the hogs to steal.  This is also a perfect location to spot and stalk hogs!

At sunset, the ranch owner and his brother-in-law met me at the entrance to the feed lot, the second my truck door opened the stench from the silage piles hit me and I knew I had found hog heaven!  We went over the night vision, thermal’s, and rifles.  I was using my LWRC Six8 Razorback topped with the Vortex Razor HDII 1×6, and Armasight’s Apollo 640 Clip-on thermal.  The ranch owner used my AR15 Performance 6.8 upper with the Armasight Zeus 75mm 3x 640 dedicated thermal scope. His brother-in-law wanted to shoot his new 5.56 AR15 with a 4×10 day-scope so we attached another Armasight Apollo 640 in front of that, turning it instantly into a night rifle!  Both 6.8 SPCs were shooting the Hornady 120SST, a devastating round I’ve used on large hogs with great success.  The 5.56 was shooting a Hornady 60gr VMax, not your ideal caliber or bullet for hogs in my opinion.

It did not take long.  In fact, right as we entered the first gate, we spotted a group of seven to eight hogs with the thermals.  They were feeding near the far entrance to the feed lot.  This was perfect, because the hogs were directly up wind from us, so the stalk was on!  We walked single file to narrow our profile, then at 60 yards one of the boars alerted to us and started walking off to the left.  We slowly spread out in a line, spaced out a few feet from each other and set-up our shooting sticks.  The plan was to let the owner do the count down and we would fire on zero.  His brother-in-law was on the left with the 5.56, so he was to take the alerted boar, who was now staring at us trying to figure out what the dark blobs were.   I was center so would take one of the hogs in the middle of the group, and the owner was right, so he would take the hog farthest right.

“Three – two – one – Fire!”   The alert boar on the left went down, but was just wounded by the 5.56.  The center hog dropped dead in his tracks, and the far right hog spun around and fell, but then got right back up.  I put a second shot into his chest and he went down again.  Then I scanned across and I saw the left hog dragging his rear.  I missed a shot, then finished him off with a hit.  As I scanned back right, the other hog had got back up onto his feet and I popped him a second time in the chest.  He went down, but got right back up, now I shot him once in the neck and once behind the shoulder but he was still moving forward, so one more to the neck and he was done.  The far right hog (which ended up being the biggest) had been hit low in the rear leg.  Just as the land-owner said “Zero” and squeezed the trigger, the shooting sticks sank into the mud, causing him to miss his mark and totally lose sight picture.  The 5.56 had jammed, so I was left shooting the big boar, that ended up being 300+ pounds and taking five well placed shots!  Some have wondered why I continue shooting even after the hog has suffered a mortal wound?  It’s quite simple.  I prefer a fast kill, to suffering.  Also, these boars will charge if given the chance.  Lastly, they are tough!  I have seen too many large hogs take, what should be stopping shots, only to continue on like nothing even happened. 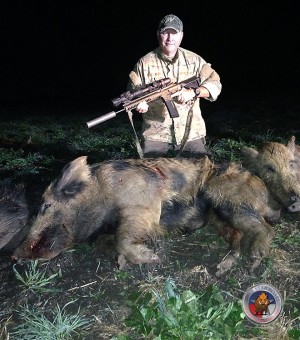 The Author with a Large, Tough, Trap Shy Hog Shot with the 6.8SPC.

After all this commotion we realized the hogs were feeding right up to a large corral-type hog trap, monitored by a motion-activated video camera, so the gate can be closed remotely after all the hogs have entered.  The ranch hands had set the trap up a week earlier and we did not know it.  For about a week they had been trapping up to fifty hogs a night, but one group of large hogs had fed on the bait right up to the opening, but not into the trap.  They were trap smart, but we were solving a trap shy hog problem with AR15s.  One of the ranch hands got to watch the whole thing transpire right on his smart phone via the motion-activated video camera!   Ha!

We killed several more hogs through-out the night, including another bigger boar who dropped right in his tracks from the same shot placement and Hornady bullet.  Here is a photo of this bigger boar. 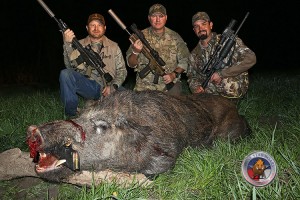 The Largest Boar of the Night, with the Author, Land-Owner and Brother-in-Law.