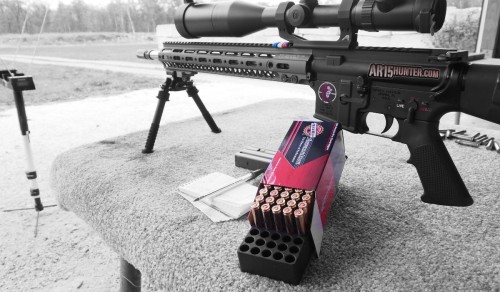 At the range testing the new 77gr TMK.

Today’s AR15 Hunter Range Report features a highly anticipated new round from the folks at Black Hills Ammunition, their new 5.56mm 77gr Sierra Tipped MatchKing (aka TMK).  Black Hills first released information about this ammo back in February, shortly after SHOT Show 2014.  It features a brand new projectile from Sierra Bullets, which is a refined version of their extremely popular 77gr SMK (Sierra MatchKing).  This bullet retains the 77gr weight of the SMK but with the addition of a polymer tip (much like you see with their 55gr BlitzKing).  By adding this polymer tip, Sierra has increased the ballistic coefficient from .373 on the SMK, to .420 (G1 profile) with the new TMK projectile!  That translates to improved external ballistics (less drag, higher wind resistance), as well as terminal ballistics.  Black Hills notes that the new polymer tip increases “uniformity of performance and penetration when the projectile arrives on target.”.

I got excited about this new projectile when I first laid eyes on the photos online, which to me looked like a new, heavier BlitzKing. Being that I’ve had great success using Sierra’s 55gr BlitzKing loads on various small game, this new 77gr TMK projectile peaked my interest as a good candidate for mid to large sized game (e.g. hogs, deer, etc.).  As soon as I started to see that this ammo was shipping, I contacted Black Hills to acquire some rounds for testing.

After speaking extensively with one of their techs, and working out the details, the much anticipated delivery arrived via FedEx this past Saturday.  Excited to put this ammo through its paces, I quickly looked at the weather forecast for the next few days.  It was quite depressing, with rain and wind for the next three days.  Thankfully, today the rain moved on, and allowed me to hit the range to test this ammo at 100 and 200 yards. 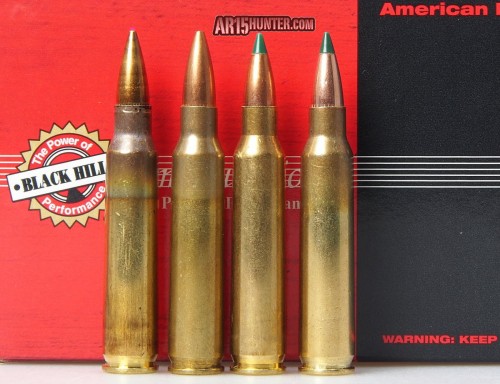 I set some targets up at 100 yards, and got my chronograph setup.  I used my 18″ SPR, which is my go to rifle for accuracy evaluation and hunting.  It features an 18″ ADCO barrel (basically a White Oak Armament barrel) with a 1/7 twist and Smith Vortex flash hider.  The conditions weren’t the best, with the ambient temperature at 48 degrees F, with about a 9MPG wind from the north and the sun hiding behind a thick layer of clouds.  I started off with a 10 round string of shots over my chronograph, and the Black Hills 5.56mm 77gr TMK loads averaged 2736 feet per second from the 18″ barrel.  This is right in line with their 2750fps claim, which produces 1293 foot pounds of energy.  The ammo was also quite consistent, with an average standard deviation of 14.49fps for the same 10 round string. 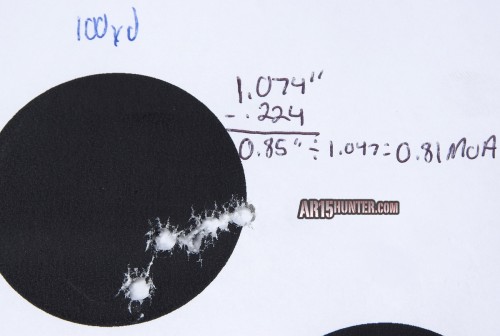 Groups at 100 yards were impressive.  I was consistently producing sub-MOA groups with this ammo, with only a couple of 5-shot groups being over 1MOA. My best 5-shot group of the day was .81MOA, and I had several at or around that size. 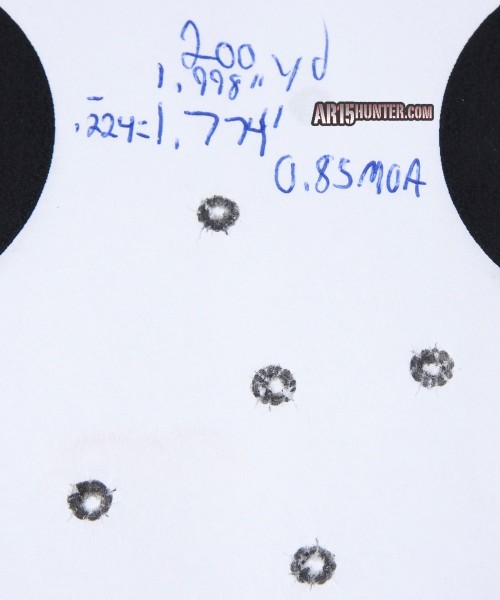 Next I moved the target out to the 200 yard line to see how well the ammo performed at twice the distance.  I shot a quick 5-shot group, with just a single breath pause between each shot, and that produced the above 0.85MOA group.  After that, I was convinced that Black Hills and Sierra had a winner on their hands. While I’m looking at this ammo for its hunting benefits, I’m sure my service rifle friends will appreciate its performance as well, on the 200, 600, and maybe even the 1000 yard ranges. 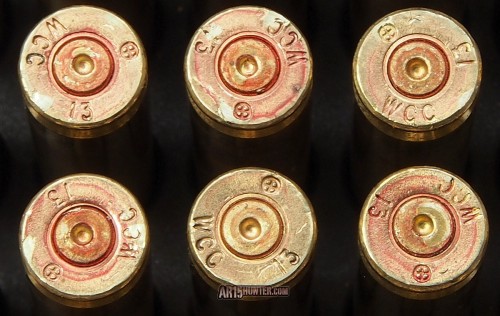 A close-up of some spent casings.

Once I got home, I took at look at the brass I had picked up from this range season. All of the brass looked great, with no signs of extreme pressure. The primers were starting to flatten out a bit, however that’s pretty common with 5.56mm in my experience. Black Hills is using 2013 WCC (Winchester) stamped brass, with a sealed primer.

So far, my initial impression of this ammo is that it’s very accurate.  In fact, it’s the most accurate heavy 5.56 ammo I’ve shot through my 18″ SPR, which has seen plenty of 69gr SMKs, 75gr Hornady BTHPs, and 77gr SMKs (most of which were loads from Black Hills).  The new Black Hills 5.56mm 77gr TMK looks to be a capable load, with accuracy that will please hunters and target shooters alike. We will continue to shoot this ammo through a few more rifles, and we’ll update this report with our findings.  We are also planning our trip to West Virginia in late November, early December for whitetail deer season.  So stay tuned for updates and the hunt report.

Today the weather in northwest Ohio decided to cooperate, allowing me to get another range session in. Conditions were favorable, with the temperature hovering around 62 degrees F, with a 10-15MPG wind directly out of the south. The purpose of this particular range visit was to verify ballistics out to 300 yards, and compare them to the my cheat sheets that were created using a ballistics calculator.  I also decided to run some rounds over the chronograph once again, since it was much warmer compared to my last outing. This time I measured a 5-shot average of 2756fps out of my 18″, 1/7 twist barrel (which was about 20fps faster than my previous average). 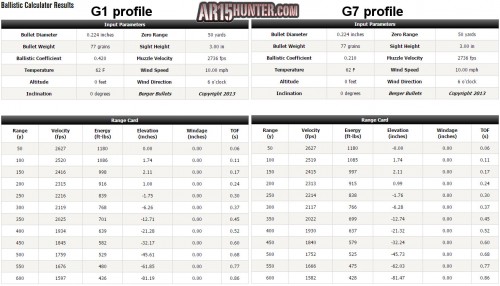 I used the velocity data from my previous outing, along with the .420 G1 profile ballistic coefficient that Black Hills and Sierra had released to create my first cheat sheet.  Since many believe that the G7 profile is more accurate with boat tail projectiles, I converted the Sierra 77gr TMK’s ballistic coefficient to G7; which equated to a BC of .210. I then created another cheat sheet using the G7 profile. Comparing them side by side, the output was almost identical out to 350 yards, however after that there were small changes at each distance (tenths of an inch).

With the wind at my back, I was confident that it would have little affect on my shots. The hits on paper backed up that thinking, with minimal wind drift noted out to 300 yards. The Black Hills 5.56mm 77gr TMK loads performed well once again, with consistent sub MOA results across the field (see the notes and photos on that below). Once I confirmed my 50 yard zero, I then moved the target out to 100, 200 and 300 yards to see where my rounds impacted compared to the readout from the ballistics calculator I had used. According to the ballistics calculator (using the data I mentioned above), my shots should have impacted at +1.74 inches at 100 yards, +0.99 inches at 200 yards, and -6.28 inches at 300 yards.

What I found in real world conditions is that my rounds were impacting at approx. +2.25 inches at 100 yards, +0.5 inches at 200 yards, and -7.5 inches at 300. This is why it’s always a good idea to get out and test the ballistics of a load at the range, versus just going off the ballistics calculator. I understand this isn’t always possible for some, so using the cheat sheet print out from one of the many online calculators will get you in the ballpark (so long as you have inputted good data). In this situation, I was within an inch or less of the projected impact zones, which would still have put me in the kill zone on mid to large sized game. 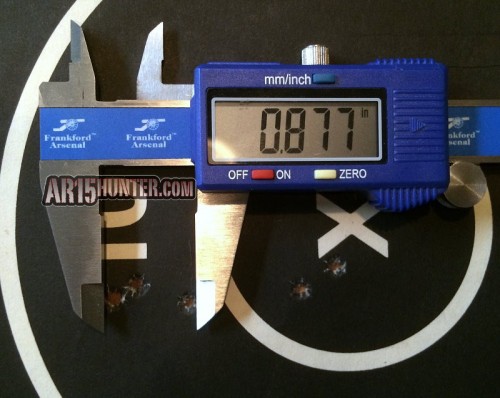 While conducting this series of tests, I decided to use 3-shot groups. When doing an accuracy evaluation, I typically will use 5- or 10-shot groups. However, in the hopes to help conserve ammo, I chose to use 3-shot groups here, which I feel work well for this type of test. As I mentioned earlier, the 77gr TMKs performed quite well. I was able to post up a 0.62MOA group at 100 yards, and a 0.77MOA group at 300. I was quite pleased to say the least. It looks like my rifle and this new TMK load are ready for deer season later this month. So stay tuned. 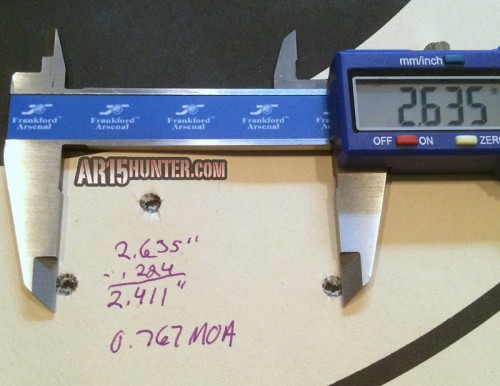 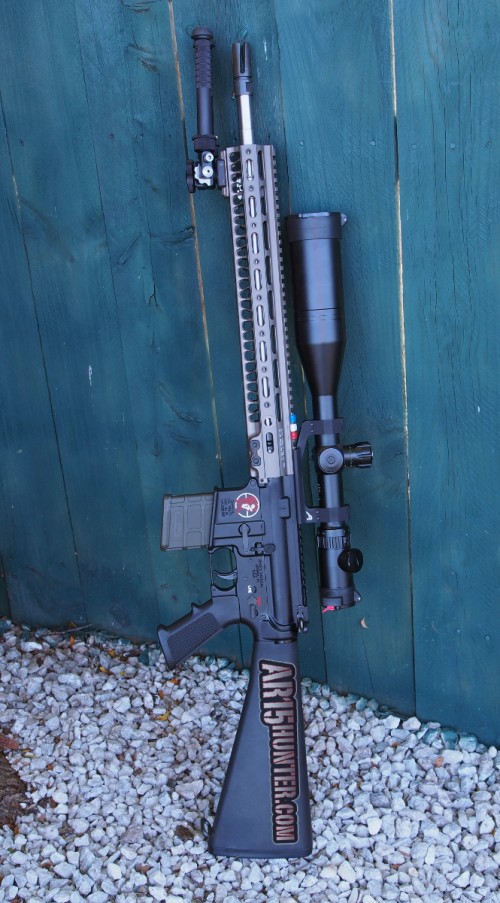 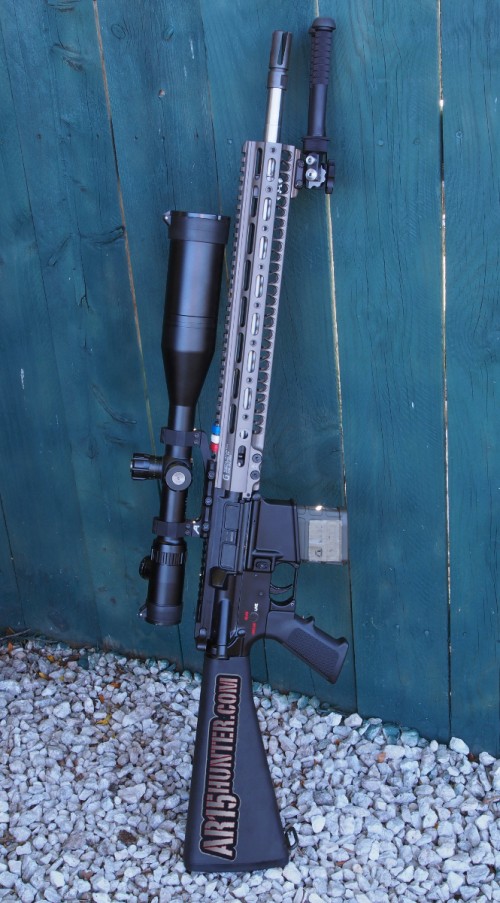