I was sitting at work watching the rain dump on my public land pig spot.  Although it was duck season and the weather was perfect for chasing waterfowl, I decided instead to chase some public land pigs the next morning, since I still had 2 unfilled pig tags in my pocket. The next morning, I pulled up to the trail head at 4:30 and began the long 8 mile hike to an area where I have previously seen pigs.  On the way up, I started checking wallows and ponds, in hopes of seeing fresh pig sign, with no luck.  As I continued the long hike in, I began to see coyote and bobcat tracks covering the trails and roads.  Because I had a bobcat tag in my pocket, along with my predator calls, I started to get excited.

I finally made it to the pond where I had previously seen pigs.  It was still early, so I had a snack and some water, while I waited for shoot time.  As the sun started to rise, it warmed the cold morning air.  I started to glass the thick sagebrush canyons, including a finger that had brush scattered down to the bottom of the canyon.  That’s where I spotted the first bobcat of the day.  It was a smaller bobcat, hunting mice in the grass.  With only the one bobcat tag in my pocket, and the two pig tags, I decided to pass on this smaller bobcat.
After seeing that bobcat, I decided to pack up and hike over to another vantage point, where I could sit and glass another area that had a lot of potential for pigs.  Unfortunately, after an hour of glassing, and moving to another canyon, I decided to change my tactics to predator hunting.   I broke out a mouse squeaker to start my first calling stand to see if anything was close by.  Within 5 minutes, I had 2 bobcats staring at me from across the canyon. After getting set-up for the shot, I decided to pass on them as well, because they were also both on the smaller side.  Slowly, I moved to my next stand where I started with a locator coyote howl, which brought back no answer.  Thirty minutes later, with no response of any kind, I moved on to my third stand. 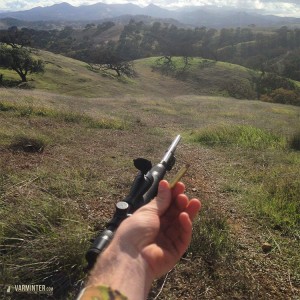 The Empty Cartridge After the Shot

Filling out the Bobcat Tag after the Kill

As I reached the spot for my third stand, I spotted a bobcat crouched on a the top of a ridge, hunting mice.  At first glance, he “looked” small.  But, as I was about to pass on him, he pounced on a mouse!  At that point, I realized this wasn’t a small bobcat.  I let out a couple of mouse squeaks, but he wasn’t interested and kept hunting, working down the ridge top.  As soon as he disappeared, I ran around the ridge and came along the back side, hoping I could sneak over and get a shot.  As I was coming around the other side of the open ridge top, this big bobcat had already crossed over to the area where I was planning on hiking down to, in order to put a stalk on him.   But, with the cat not responding to calls, and him moving out of the area, I had to get set up before he made it over a finger and out of sight.

I quickly ranged the bobcat with my Leupold RX-1000i TBR rangefinder, and it read 455 yards.  Lying down on the hillside, I leveled out my AR15 with the U.S. Optics level, and locked it down with my Harris bipod.  This rifles has the Nikon P223 4-12 600 BDC scope mounted on it, so I settled the 450 yard mark high behind the shoulder. I squeezed the 3.5 CMC trigger and sent the 55gr DRT HP bullet to its mark.  The bobcat went tail up and rolled-over.  My shot was perfect, and it connected on my biggest bobcat to date, weighing in at 38.5 pounds.  To top it off, this was on public land! 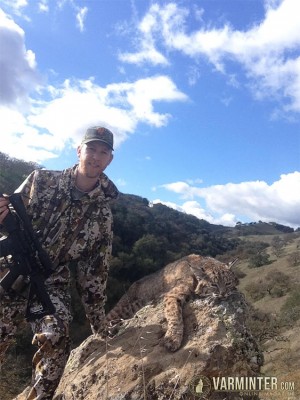 The Author with his Big California Bobcat.

After taking some pictures, and video, the long pack-out back to the truck began.  This hunt started as a pig hunt, but ended up with me hunting California bobcat with my AR15!  Connecting with one of the top predators of the food chain, was a hunt to remember!