Back in April of this year, we released our first Cartridge to Watch article about the “Ferocious 277 Wolverine“. If you have read that article, you’re likely up to speed on the cartridge. If not, I’ll give you a quick lesson.

The .277 Wolverine, which was developed by Mark Kexel from Mad Dog Weapon Systems (AKA MDWS), is basically a 5.56mm/.223 case necked up to .277. This allows you to use .277 bullets, much like you see used in the 6.8 SPC cartridge, without having to change out a whole list of parts on your AR15. With just a simple barrel/muzzle device swap, you can be shooting a heavier round with greater energy than your typical .223. This is very appealing to hunters, especially those looking to use an AR for mid sized game (deer, etc.).

Currently, MDWS, along with the strong followers of the .277WLV,  have come up with a vast database of loads using bullets from 75gr up to 200gr (75 to 130 grains for supers, 130 grains to 200 grains subsonics). There are also two companies who are producing factory loaded ammunition, Mid-South Munitions and JB’s Firearms. While the 5.56mm case doesn’t have the case capacity of the larger 6.8 SPC, thanks to some serious load development from this cartridge’s large following, the .277WLV is nipping at the heels of the 6.8, in terms of velocity with the same projectiles.

Editor’s note 11/11/2015: Mid-South Munitions is no longer loading ammo for the .277WLV. JB’s Firearms is still our go to source for high-quality, commercially loaded .277WLV ammo. Also, there is a new company that has started loading for the Wolverine recently, named Alpha 7 Armory. However, we have not tested their ammo yet, so we can not comment on its quality. That said, we’ve been assured by MDWS that it is good to go.

See our video review below: 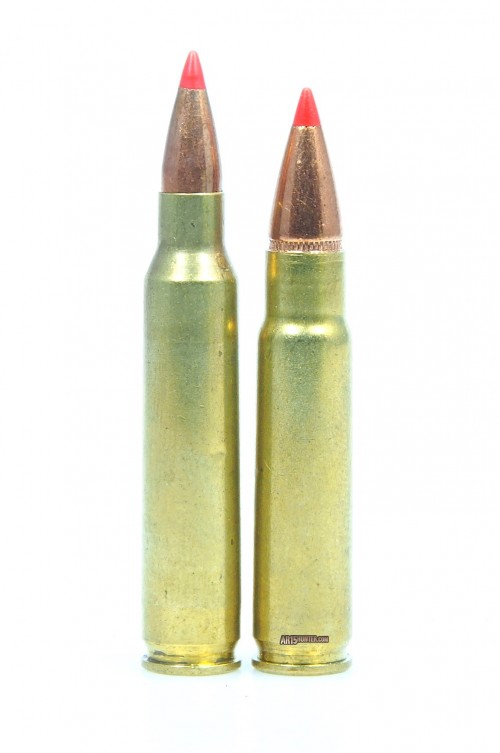 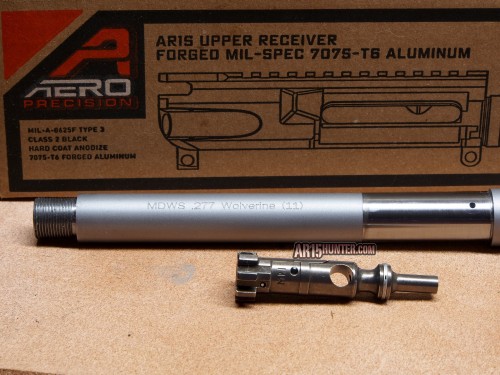 Getting ready for our build.

Shortly after our Ferocious 277 Wolverine article, Mark sent us one of his 16″ 1/11 twist .277WLV barrels for evaluation, along with one of his headspaced MDWS NiB 5.56mm bolts. 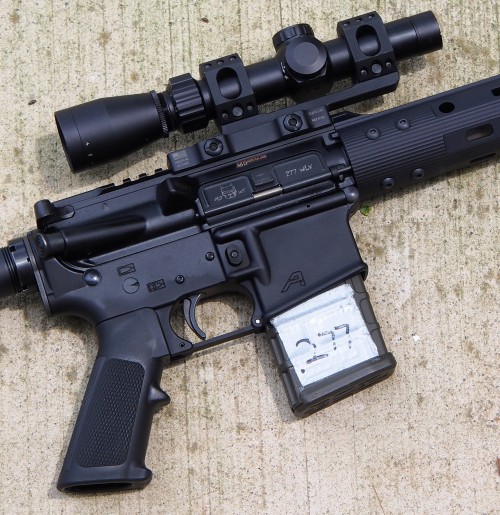 A close up of the main components of our .277 build.

We then assembled an upper, and mounted it to an Aero Precision Gen 2 lower. 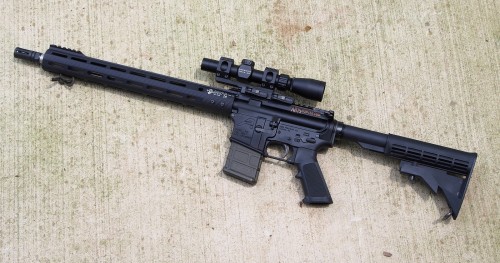 When we did our initial zero, we used a Leupold Mark AR 1.5-4x scope. This is the scope I plan on using with this rifle for deer hunting come fall. I also used this scope to take some varmints with the .277WLV; more on that later. Right away I was liking the .277WLV. The barrel, combined with ammo that was sent to use from Mid-South Munitions and JB’s Firearms, was performing quite well. So long as I did my part, at 50 yards I was shooting nice “one hole” groups. I then moved over to my club’s 500 yards range and decided to take a stab at ringing the steel gong. Using Mid-South’s published velocity (which was taken using a 16″ barrel), I added some elevation to my scope and was ringing the steel.

While waiting for time and weather to cooperate for us to get some range seasons in for our evaluation, I was able to take some game with the .277WLV. Being I started testing this barrel in spring, it was time to see what the .277WLV was capable of on varmints. The first of which was a surprise guest on our small hobby farm. 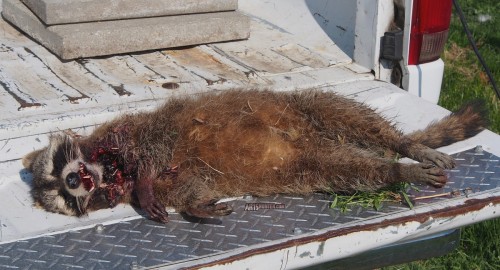 A problem coon that was taken with the .277WLV.

The first victim of the .277WLV was a raccoon that our LGD (livestock guardian dog) had treed in the corner of our goat pasture. We have poultry as well, and I think this coon was trying to get an easy meal. The LGD treed him sometime in the middle of the night, and after my wife woke me from my slumber, we headed out to see what the commotion was. You see, just prior to this event the LGD had treed two other coons in the same tree, which we dispatched with a .25-45 Sharps.

The difference this time was that this coon was lower in the tree, and he was mad! He was trying to get the dog as it jumped, so I knew we had to make this quick. With my wife holding a flashlight on the coon, I quickly took aim through the Leupold scope. I slowly squeezed my CMC 2-stage trigger until the rifle reported and I watched the coon fall. The 90gr Speer TNT did a number on him for sure, as it smacked him at 2600+ fps. Unfortunately, due to it being pitch dark, I wasn’t able to get any video. 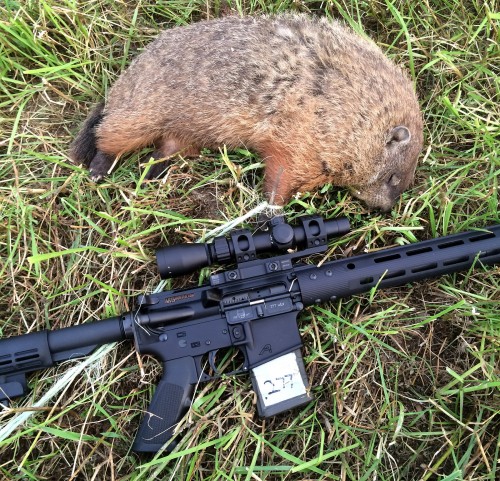 One of many whistle pigs taken with the .277WLV.

Next I moved out to some local bean fields to look for some whistle pigs. From May to July, I took about half a dozen groundhogs with the .277, using loads from both JB’s and Mid-South; like this critter pictured above, which was a nice size hog taken with JB’s 90gr TNT load. Both loads did some serious damage; neither of which would be a good choice if you are into saving pelts. Ranges were from 65 yards on out to 150. Being I only had a 1.5-4x scope installed, I wasn’t able to take anything longer. Then again, this rifle was built to be used on larger game, so I never intended to install a high magnification scope, other than for our range tests.

So, how does it shoot?

For our accuracy evaluation, we chose two loads; Mid-South’s 110gr Hornady BTHP and JB’s 90gr Speer TNT. I was very surprised by how well the .277WLV shot during our testing, especially when you consider that the MDWS 16″ barrel retails for just $215, with MDWS having sales often; at the time of writing this, the 16″ SS barrels were only $175.

The ammo and barrel combo produced consistent 1MOA 5-shot group results at 100 yards from my Target Shooting Inc. Model 500 rifle rest. I have several groups that were sub MOA, with our best overall group being just 0.697MOA, and the worst being 1.38MOA. All of these groups were recorded using factory loads. If one was to spend some time developing a load to their specific barrel, it’s likely you could see consistent sub-MOA results.

The .277 Wolverine has really made an impact on me. What started out as a “neat” wildcat has evolved into a very capable cartridge, one that has much more appeal to me as a hunter than some of the other “standardized” cartridges that are based off of the 5.56/.223 case. You gain a great deal of energy with this round, without sacrificing too much in velocity. There’s also a wide range of projectile choices, many of which are available in factory loads. The loads we tested performed beyond our expectations, so if you miss that whitetail this fall, it’s your fault, not the Wolverine’s. Depending on the load you are using, and the game you are chasing, the .277WLV will likely perform well out to 250 yards, or beyond.

So far I’ve only been able to test the .277WLV on varmints, but I will be taking it with me this fall when I travel south for whitetail, along with some predator hunts. So, stay tuned in to our Facebook and Instragram pages for updates. I’d like to close with a huge thank you to Mark at MDWS, as well as Bruce and Zack from JB’s Firearms and Mid-South Munitions. Their generosity in providing us with parts and ammo helped make this article possible.