Back at SHOT Show 2015, Franklin Armory released the concept of an all new tactical trigger system for the AR15 platform, which they dubbed the Binary Firing System; BFS trigger for short. While this is not necessarily something for your hunting AR, we were very intrigued by this system, and wanted to know more.  Plus, we knew that those of us that use our AR15s for hunting, also enjoy having fun at the range, as well as tactical style shooting; whether shooting 3 Gun matches or other tactical shooting events. Heck, many just love doing mag dumps.

Over the course of the year, Franklin continued to develop the BFS, and started teasing it on their Facebook page this past summer. This added to the excitement for us and others, and we here at AR15 Hunter were eager to test one. Franklin was kind enough to get us a trigger right before the Thanksgiving holiday, which we quickly put to use for our teaser, “First Look” video.

When the BFS was first released to the public, it was only available in Franklin’s lowers. While they make fine forged and billet lowers, there was a cry for them to sell the BFS as a drop-in unit. Franklin worked diligently to make this a reality, and over the course of a month of so, they made that happen. The BFS trigger system retails for $399, and includes the Binary Firing System drop-in fire control group, as well as a nice ambidextrous selector. Currently, the BFS is only compatible with their selector, and due to the complicated geometry needed for the selector to work properly, it doesn’t sound like that will change anytime soon. I found the selector to work very well, with zero complaints on its function or ergonomics. Franklin also includes shims with the BFS, along with detailed instructions for installation. This is not just a drop-in unit. Due to the BFS’ tight tolerances, and the fact that they have found a variance of 3-5 thousandths with in spec lower receivers, some fitting may be required, with the included shims needed for the BFS to fit your lower. 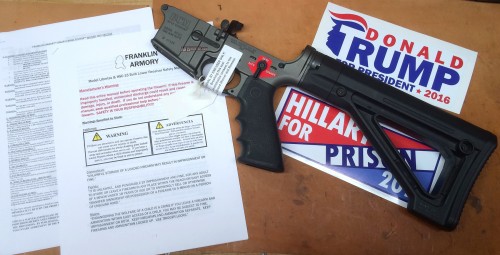 My BCM lower with BFS installed by Franklin

The other option is to do what I did. In order to get my BFS, I sent in my Bravo Company USA lower receiver, and Franklin Armory installed the trigger system into  my lower, which included fitting it to my receiver, testing the unit, and then returning it to me. They offer this service to customers for $125, which also includes return shipping and any machining costs that may arise (some lowers require machining if they are out of tolerance, or have extra material in the upper shelf area; like many Colt lowers, for example). Above you can see the BFS as I received it from Franklin in late November. 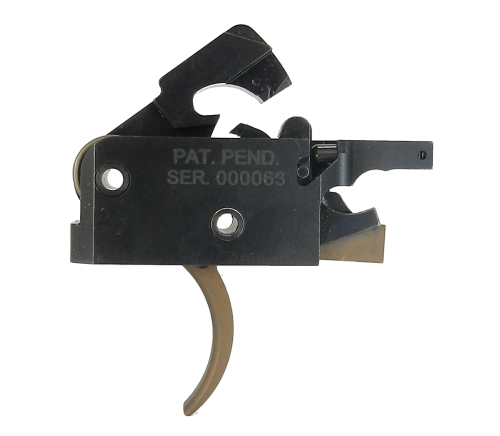 Side shot of the BFS (photo supplied by Franklin Armory)

Here you can see the BFS drop-in unit. This system is compatible with standard trigger pins only; sorry no Colt large hole lowers.

Top view of the BFS installed in my BCM lower.

Above is a shot that shows the BFS installed in my BCM lower. 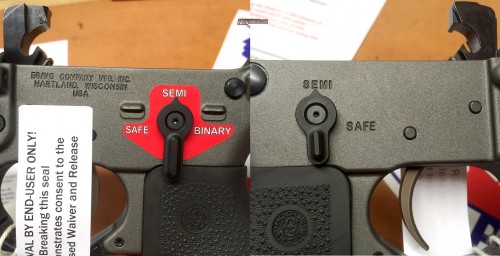 A close-up look at the included Franklin Armory ambi selector

As noted above, the BFS includes a nice ambi selector.

Many have asked if we’ve run into any issues with the BFS. The short answer is yes, however they are not really issues with the design, function, or quality of the BFS trigger. The number one issue I ran into with the BFS was that it ate all my ammo! Seriously, you can burn though an ammo stash in very short order. OK, in all seriousness now, the biggest “issue” I ran into with the BFS while running over 1000 rounds over it was hammer follow. This is something that anyone who’s spent some time with a simulated full-auto system will run into, whether they’re using the BFS, a SlideFire stock, or running a BumpSAW. With a semi-automatic AR, your finger and the trigger set the cyclic rate of the firearm, up until you reach a point where you are pulling the trigger faster than the bolt carrier is moving. This will cause hammer follow, which simply put means that the hammer will already be released and following the carrier into battery, versus the carrier and bolt already being in battery when the hammer drops. This will cause a light strike on the primer, and the gun will not go off. To get the gun running again, you just have to rack the charging handle (or, give it a half pull to cock the hammer, but not eject the live round in the chamber).

How do you reduce hammer follow? Well, there are several ways. First off, you can lighten your reciprocating mass to try and speed things up. This involves running a lighter bolt carrier, lighter buffers, etc. Next, you can run a stronger buffer spring, like a SpringCo Red Extra Power carbine buffer spring (assuming your rifle is using a carbine receiver extension). Lastly, you can open up the gas port. In either case, what you are trying to do is increase the speed of the carrier to match the RPMs of your trigger and finger. What setup works the best? Well, that will all depend on your barrel length, gas system, initial gas port size, etc. You will have to play with things to get it to run right for you. Now, this is only if you are purchasing the BFS to do mag dumps. If you are using the trigger as designed to do fast double taps, you should have no problem doing so with most any setup. I know that in all the testing I did with various carrier and buffer combinations, the trigger would always function well for double taps.

The Binary Firing System is a very cool trigger. While I don’t do a lot of simulated full-auto fire, I have played with various systems on the market; from SlideFire stocks to Tac-Con’s 3MR trigger. In my opinion, none of them compare to Franklin Armory’s BFS. Not only is the BFS faster in most cases, it’s MUCH easier to run. There is no steep learning curve to the trigger. Most everyone I let use the trigger was able to pull off some quick bursts their first time using it, including my wife.

How does it feel? The BFS to me feels slightly better than a mil-spec or stock AR-15 trigger. There is virtually no take-up or creep, and mine is breaking consistently at about 6LBS 4OZ in semi mode, and about 6LBS 5.5OZ in Binary mode (on the pull). This is about a pound lighter than most of the stock AR triggers I have, and the break is similar. The reset in semi mode is a little long and gritty, however I’m spoiled by my LaRue and Geissele triggers; and, compared to a stock AR trigger, it’s not bad. The reset in Binary mode, however, will put a big grin on your face 🙂

With a MSRP of $399 for the drop-in unit, the BFS is priced very reasonably. When compared to its very limited competition, the BFS is actually $100 cheaper when comparing introductory pricing, and if it follows the same trend as other three mode AR triggers, the price may come down in the future. This trigger will not be for everyone, that’s for sure. Many will say they can do the same thing with a Giessele SD-3G trigger. While that may have been the case with the BFS’ competition, that’s not the case here. Unless you’re Jerry Miculek, I highly doubt you’ll be able to pull off splits like you can with the BFS. You could say the BFS lets you shoot as fast as Jerry. Well, almost as fast!  🙂

For more info on experimenting with different carriers and buffers with the BFS, see this huge thread over on ARFCOM: http://www.ar15.com/forums/t_3_118/666636_New_three_position_trigger_from_Franklin_Armory___Update_testing_underway.html&page=1

This review is of the Gen2 BFS trigger system from Franklin Armory. This was the first generation of the trigger that was released to the public, however it’s actually the second generation of the trigger design (you can see the original “Gen1” design in the photo at the top of this page. They are now offering the Gen3 BFS, aka the BFSiii. We have tested one since they launched this past summer (2016), and will have updates on THIS PAGE.