Hunting the Giant Jackrabbits of Arizona with an AR15

The sun was lighting up the Jackrabbit’s ears, as I told Will he was okay to take the shot.  We were finishing up a great day of Prairie Dog hunting in the brushy grasslands of Northern Arizona and came across these Jackrabbit “giants” feeding in the waning sunlight.  Because we were eager to hit the pavement before it got too dark to navigate the dirt roads leading out of the private ranch we were hunting, we both decided to take only one Jackrabbit each.  I had taken one a bit earlier, so now it was Will’s turn.  (Video included below)

Jackrabbits are scattered throughout the Western United States, with the Southwest holding a large portion of the population.  Jackrabbits are considered hares, so they are not really “rabbits”.  I won’t go into that now, but the differences are not enough to change up how you hunt either species.  The Black-tailed species of Jackrabbit we were hunting is the third largest hare found in the United States, right behind the Antelope Jackrabbit and the White-tailed Jackrabbit.  The Antelope Jackrabbit is found in portions of Southern Arizona and can grow quite large.  Even the Black-tailed Jackrabbits we were hunting had at least two pounds and 6 to 8 inches in length over the ones I was used to hunting back in California.  The Jackrabbits in Arizona were HUGE compared to those!

Both Will and I were hunting with AR15s.  I know some traditional hunters will think that might be a tad overkill, but as a traditional hunter myself, I look at it in a different way.  When I was young, I missed plenty of running Jackrabbits with my bolt-action rimfire rifle.  That all changed the day the most popular rimfire rifle ever made ended up in my hands one fall morning.  With a Ruger 10/22 rifle, no longer were the quick hares impossible to hit.  It wasn’t an improvement on my shooting skills.  It was the fact that I now had 10 rounds of CCI Stingers to get on target and make the shot.  An AR15 is no different than a Ruger 10/22 in functionality.  Both shoot a bullet as fast as you pull the trigger, but only one bullet per pull.  The AR15, like the 10/22, at least gives you a chance.  Before the advent of these semi-auto rifles, the big feet of a Jackrabbit would be kicking up dust, as you helplessly watched it run into the next county!  Thankfully, I did not have to put my skills to test against a running Jackrabbit, as these guys were too busy gobbling up their dinner, to notice a couple of stalking hunters.

Before Will got the chance to shoot at his Jackrabbit, I was able to take one using the Franklin Armory F17-L AR15 rifle in .17 Winchester Super Magnum.  Although my shot was relatively close for this round, I was still impressed by the performance of the 20 grain bullet on the big Jackrabbit.  I hit him lower than I wanted to, down the back, but it still dropped him instantly.  It was a monster by California standards and probably the largest Jackrabbit I have ever shot, but in Arizona it was probably an average sized Black-tailed Jack.  However, for Will, it was a chance to finally get a close-up look of how big these Arizona hares can get and he was thoroughly impressed!

As we drove on, we drove in and out of a few small valleys.  As we crested the edge of a particularly brushy one, I happened to catch a glint of the sun hitting the large ears of a Jackrabbit feeding next to a large bush.  The same ears that cool them down in hot weather, also give them away to hunters.  Will, who had flown out from Ohio for the hunt, grabbed his custom AR15 in 5.56mm/.223 and found a good spot to set-up.  In the meantime, I got the video camera rolling, so I could catch the action of the shot.  At the crack of the rifle, the 55 grain Sierra BlitzKing slammed the rabbit hard, putting it in the dirt with a familiar death kick from the nerves.  Will shouldered his rifle and went out to grab the rabbit.  He was shocked at the size of the rabbit while it fed, but even more so now that he had one in his hands.  It was in the 3 to 4 pound range, with a huge set of legs that were meant for getting away from the local predators, like coyotes and bobcat.  We got a few pictures with the Jackrabbit and decided to get to the pavement as soon as possible.  The sun was dropping fast and our hunt for the day was over. 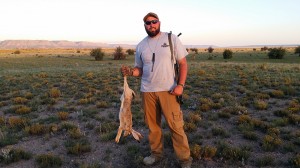 Will with his first Jackrabbit taken with an AR15