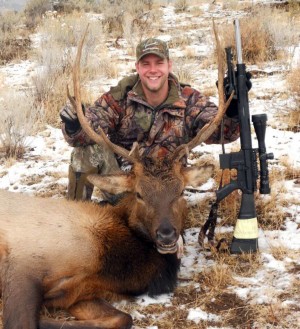 Eric Verwoest with his first Elk, taken with a Verwoest Precision Automatic AR15 in 243WSSM.

The following is the story of our Oregon Elk Hunt with an AR15 in .243 WSSM – The Video is Included Below

On this hunt, I was using my Verwoest Precision Automatic 243WSSM AR15 (a rifle I built) with Winchester factory loaded 95gr XP3 ammunition.  This rifle was made for long range, big game hunting, so I was eager to put it to the test.  Our hunt was courtesy of Gordon Long of Multiple Use Managers and we were hunting the Three Valleys Ranch for the Oct. 24th 5 day season in 2012.  My tag was for any elk.

The ranch is huge, 38,000 acres, and straddles the eastern edge of the Cascade Mountain Range.  It is a mix of high timbered peaks, open grassy mountain sides with juniper, and low sage flats make for an incredible and vast landscape to hunt. Heavy snow covered the highest peaks giving way to a light dusting on the lower slopes. The countryside alone was worth the long drive from Chico, CA.

The ranch has two cabins, one at the upper end of the ranch at the foot of Ironside Mountain and one at the southern end near Beulah reservoir. We chose to start our hunt near Ironside.  The cabin was already full of hunters so we pitched our tents outside. Fortunately, we were prepared for the cold weather.

A view of Ironside Mountain from camp, shot right after we arrived, and the next morning, transformed by snow.

After camp was up we set off to go scout for elk. After just 15 minutes we spotted what looked like a nice bull on the slope above camp. At least one cow accompanied him, but the heavy timber made glassing difficult. What was apparent was that the elk were on the move, heading down the slope towards the valley below. We spent another 30 minutes looking for more elk to no avail. We moved off in the opposite direction of the two elk we had seen earlier and set up a target to verify that our rifles were zeroed and ready for a long shot if necessary. I was shooting a Verwoest Precision Automatic 243WSSM AR15 with Winchester factory loaded 95gr XP3 ammunition.

We awoke early the next morning to the sound of the other hunters warming up their ATV’s for their trip up the mountain. A warm breakfast was our first priority after spending the night in 12* weather. After our bellies were full we drove back to where we had spotted the elk the day before. The night before one of the hunters in our group had spotted some fresh elk tracks crossing the road in the same area and marked the spot with some neon tape in a juniper tree. We started glassing in the direction the tracks were heading. Across the valley, just outside of the timber, we spotted a very large herd of 50 or more elk, stacked up against a fence line. They looked like they had come down to water and feed at a small spring and were getting ready to head back up the hill.

Our goal was to take a cow or preferably a small bull. We were purely meat hunting and saving the largest animals for Multiple Use Managers paying clients. The elk were a good two miles from us, but we could tell that there were some mature bulls in the herd and probably some smaller ones. The hunt was on!

A view of the mountain the elk were on from my tent. Its peak is hidden in the clouds.

We drove back to camp because it was closer to the animals than where we had first spotted them and started our approach. By this time a steady snow had begun to fall. The animals had moved on. Glassing was becoming difficult because of the snow and clouds that had moved in. We searched for tracks to try and gain a bead on the direction they were moving, but the snow was falling so heavy that it was quickly hiding any evidence left by the elk. It was suspected that the elk had moved up the ridge line into the timber to spend their day.

We crossed the canyon to the opposite hill where the elk had been spotted to avoid spooking them and worked our way slowly up the draw looking for the elk in the thick junipers on the opposite slope. When we reached the peak we crossed back over the connecting saddle and began our decent down the ridge line the elk were first spotted on. We knew the elk were close and all the sign we were seeing at the top of the mountain confirmed our suspicions that this was where the elk spent their day. Clouds would pass through and it would become foggy limiting our view to a few hundred yards then it would clear up, however the snow was relentless. A few hundred yards into our decent the elk were spotted on a small finger jutting out from the main ridge. We were in a good position to shoot from, but the heavy snow fall was preventing a positive reading from our rangefinder and the clouds rolling through were obstructing our view even further. Dropping our packs, we slunk down into a low draw and working the wind we began our stalk. Trying our best to stay low and keep rocks and trees between us and the 50 pair of elk eyes we managed to slither up to a low saddle with some large boulders for cover. My father set the camcorder up under cover and readied to record the kill while I ranged the elk and got myself into a good shooting position. 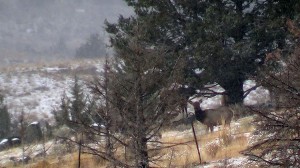 A few of the elk we were watching when the bull stepped out.

From our new vantage point we were able to positively range the elk in view at 348 yards. I dialed my scope up 3/4 MOA and readied for a shot opportunity. We had spotted a spike bull during our stalk and made him our primary target however, from our position we could not see him. Afraid to move for fear of spooking the herd we watched them through our little visible lane through the trees. After what seemed like an eternity watching the animals move by we decided to settle on a cow, but a solid shot opportunity did not present itself, so we continued to wait. Then, a 5×5 bull stepped into sight. Our focus immediately switched to him. I had to make a slight adjustment to get a tree out of my shooting lane then I let the hammer fly on the 243WSSM purpose built for this kind of shooting. Through the scope I could see what looked like a solid hit, but out of habit I let another round rip. I did not lead the elk and the second shot cleanly missed, but it was not necessary.

An end to a successful Elk hunt.

The elk staggered and disappeared behind some juniper trees out of sight and the herd went running by, some very impressive bulls bringing up the rear. We walked down the hill to find the blood trail, but no need, the elk had only staggered a few paces and had fallen over out of sight. The little 95gr XP3 bullet had passed clean through the elk, breaking his ribs on both sides and blowing up the heart in the process. We had our elk! The weather cleared, the snow stopped, and the sun shined!

“The little 95gr XP3 bullet had passed clean through the elk, breaking his ribs on both sides and blowing up the heart in the process.”

Eric Verwoest
Owner at Verwoest Precision Automatic
Verwoest Precision Automatic is a small, family run business. My wife has a passion for shooting guns & for myself, I really enjoy a good hunt. We want to provide you with the best of both worlds. Our AR's are great for hunting in heavy brush & timber as well as taking game at 700yds or more. We want to offer you an AR with the precision & versatility you've always wanted, with the customization you've desired.

Newer PostTexas – After Harvest Nighttime Hog Hunt with the 6.8SPC
Older Post AR15 Triggers for Hunting – What Are My Options?