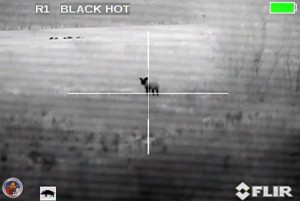 A Night Vision View of a Coyote about to get shot, with a Sounder of Hogs in the Background.  The Video is Below.

The night before Texas Deer Gun season opened I headed out to a large Central Texas cattle ranch to do some hog and predator control.  There was a 57% moon and a cool front had moved in so the hogs would be moving, night vision and thermal would be working great.

For this trip I used the LWRC Six8 Razorback rifle, with the Vortex Razor HD II 1×6 scope, and the Armasight Apollo 640 (30Hz) 42mm lens thermal clip-on scope.  To quiet things down I was using the YHM Titanium Phantom Thread on suppressor.  For the first hour or so the hogs were moving too well, every sounder I spotted was not stopping and I could not get closer than several hundred yards.

Finally, I found a sounder that was rooting and feeding in one spot;  I also spotted a lone boar trailing the group, so one of the sows must have been in heat.  My plan was to cut off the lone boar before he made it to the group, then try and get some of the group if they did not spook.  As I was moving the 400-500 yards down to the boar, I spotted a coyote mousing.  I stopped to watch for a second through my scope, but was planning on letting her pass.  That changed, when the coyote started moving right to me.  This was too good of a shot to pass up, so I waited until she got to twenty yards, squeaked to stop her, then sent a suppressed 120gr SST bullet her way.  That was it for the coyote, she spun a few times and dropped dead (watch the shot in the embedded video).  The group of hogs were still a good 300 yards away, and the boar was still about 400 yards away. They stopped for a second, but the suppressed report was not enough to send them running and they went right back to rooting. 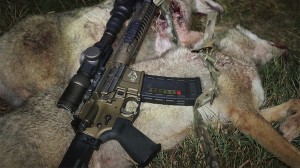 Two coyotes taken by the author with night vision.

After closing the gap between myself and the boar down to just 60 yards, the wind started gusting and swirling.  He winded me and started trotting away!  I took the only shot I had, which was a rear shot (this is an eradication hunt) he spun and I put one last shot in his neck for the quick kill (see the video).  He was not the big boar I was hoping for and hit the 190 pound mark.  Even after the shots on the coyote and the boar, the group of hogs were still unfazed, feeding two hundred yards away.  Unfortunately, my luck ran out just as I started stalking them, when the wind shifted and they ran for the next county. 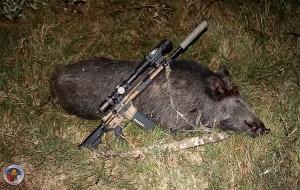 A nice Hog taken with the LWRC Six8 Razorback rifle.

There is a bounty for hogs and coyotes on this ranch, so I went to gather them with my truck.  By the time I made it back to the field, there was already a male coyote circling the boar.  A quick 100 yard shot and he was down for the count. It was a very exciting stalk with a mixed bag on the hog and coyotes.  The new thermal and suppressor made for a great combo, and I was very pleased with the performance of both. 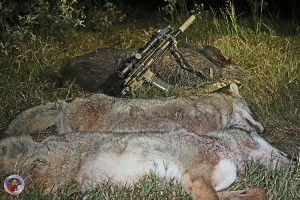 A Mixed Bag of Coyotes and a Hog taken by the Author with his LWRC Six8 Razorback rifle.