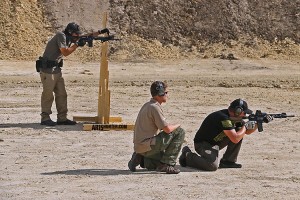 I was invited down to Copperhead Creek Shooting Club in Marble Falls, Texas for the first Noctober nocturnal live fire event.  The event was billed as a nocturnal live fire event that allows technology vendors, law enforcement & military personnel, and civilians to come together.  Unlike any other event, NOCTOBER is a rare opportunity for attendees to train with professional devices.  Most importantly, the event raised money for both SOWW Special Operations Wounded Warriors, and FTWGA For Those Who Gave All Medal of Honor recipient Dakota Meyer’s organization.  These are great groups of people that do great things for our wounded veterans. 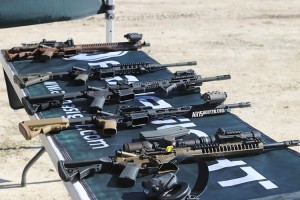 Armasight Shooting Lane with lots of their high-end night vision and thermal optics.

Starting the event off, Jim Smith (Delta Force Sniper), CEO of Spartan Tactical gave us a briefing on “APPLICATIONS OF TECHNOLOGY”, myths and realities.  He went over the different Night Vision I2, and thermal technology basics, showed some units and mounting systems , and how they worked.  Then, everyone was divided into groups and sent off to the various firing lanes to try the optics available. 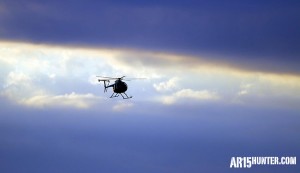 There were 5 lanes, as well as shooting from a “little bird” helicopter stage (extra charge but was awesome!).  All lanes had professional instructors that are combat veterans from SOF units.

The long range lane was run by Sisk rifles and Armasight personnel.  Armasight had their new thermal pro line (not released to the public yet there for everyone to shoot), with heated silhouette targets out to 800 yards. Sisk rifles had their new STAR stocks Sisk Tactical Adaptive Rifle stocks.

This lane included a Night Vision carbine course run by Armasight and LDI.  Participants shot with the rare PVS-31’s and GPNVG-18’s.

The white light carbine course, which was sponsored by Surefire. Instructed by ex-Seal and owner of combative concepts-Dave Maynard.

Sponsored by TNVC. Random Night Vision,  it was a thermal shoot and product demonstration.

For someone wanting to get into night hunting this was the place to be.  You could shoot a Apollo Pro, LWTS, and T70 withing just a few minutes of each other in a night time, outside environment.  For those familiar with night vision and thermal, you had pros there teaching you their tricks and the use of scopes that were released for the first time pre-SHOT Show.  I think everyone walked away with some goodies from the door prizes and a silent auction benefiting FTHGA and SOWW, with prizes donated by Armasight, Unity Tactical,Wilcox, GT Distributors, Team Wendy, Strike Industries, Hexmag, TNVC, Badger Ordnance, EOTech, ATK, Night Optics, Brownell’s. 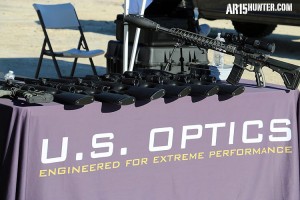 U.S. Optics with a variety of optics to try at the Noctober Nocturnal Event

I am told this is going to be an annual event and next year it will be held close to the Dallas Forth Worth metroplex.  If you are in the market for night vision or thermal I highly recommend attending and actually using the units side by side, in order to help with your purchase decisions.