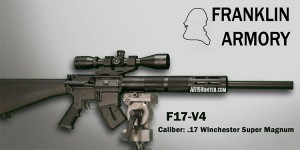 Editor’s Note:  The $1499.00 MSRP of the new Franklin Armory F17-V4 – 17WSM rifle brings the price down to the range many were waiting for in a high-end rifle, with a price that is affordable.

“The new F17-V4 features all of the same proven characteristics that has made the F17-L one of the most reliable and accurate rimfire MSR (Modern Sporting Rifle) configurations on the market today,” said Jay Jacobson, Franklin Armory President. “Like all of our other quality firearms, we have incorporated the same attention to detail to provide a high-quality and reliable platform that I am sure all of our customers will truly appreciate.”

Compared to the 5.56 NATO cartridge, the .17 WSM obtains similar velocities with long range accuracy that most varmint hunting and target shooting enthusiasts desire. The gas piston system, developed in partnership with Osprey Defense, adds increased reliability and decreases cleaning requirements. Because the .17 WSM is a rimfire cartridge, it is not classified as an “Assault Rifle” in most states. In California, the F17-L™ is distributed with a standard magazine release button!

The Franklin Armory™ F17-V4™ platform is based on a traditional modern sporting rifle with a few key distinctions. The rifle’s buffer was custom made to match the lighter recoil and shorter stroke length of the .17 WSM. The patent pending bolt carrier group is based on the original Eugen Stoner design of a rotating locking bolt, but is cut differently to facilitate the custom sized magazine feed lips and the pistol length gas piston system. The carrier is also notched to have a fully functional forward assist. The Free float, tripod mountable handguard has provisions for installing a bipod stud and Magpul M-LOK accessories.

Every firearm produced at our facility in Morgan Hill, California is created using 100% American made parts & materials! To learn more about the F17-L™ or to locate a Franklin Armory™ dealer, please visit www.franklinarmory.com. 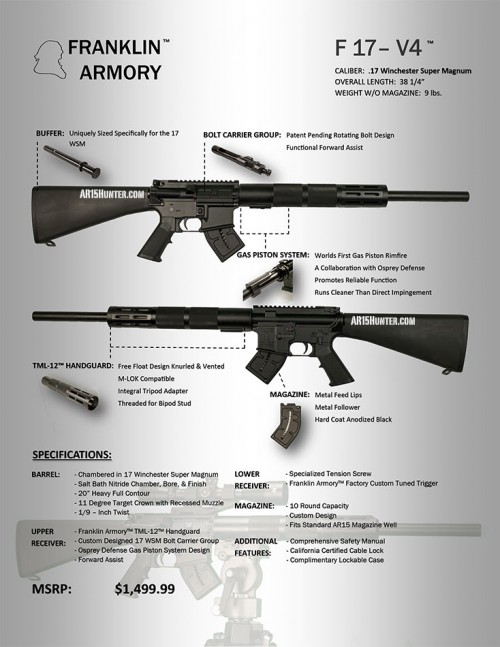 Spec Sheet for the Franklin Armory F17-V4 with Forged Receiver