When shopping for 6.8 ammo online last year to replace my dwindling supply of 95gr TTSX ammo, I stumbled across Federal’s new 90gr gold dot offering. I knew the Gold Dot has a bonded core, and would make a stout hunting bullet at 6.8 velocities so I decided to give them a try. Especially at less than $20 a box. I purchased a few boxes for testing in one of our custom 16″ barreled carbines. 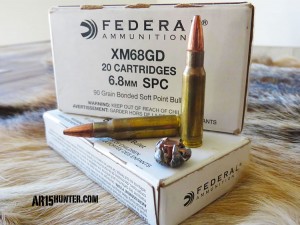 The ammo comes in a simple cardboard box with no separator or buffer for the individual rounds, much like cheap fmj 223 ammo. The bullets are what I call old fashioned looking, lacking a fancy polymer tip or aerodynamic pointed hollow point. They seem rather plain compared to many of today’s bullets. Once field testing commenced, I realized that the ammo may be cheap in price, but not in performance. My chronograph testing yielded an average velocity of 2825 feet per second. That’s pretty dang good for a 16″ barreled carbine shooting a cartridge with a case capacity that won’t even hold 35 grains of water.

Precision testing with our own, Verwoest Precision Automatic custom built 6.8SPC, yielded groups that measured 1 1/3 inches at 100 yards. This may not seem fantastic compared to match ammo, but this must be taken in context. This is ammo designed to be massed produced at an affordable price and it’s intended use (at least in my hands) is for shooting animals out to 300 yards. This ammo will consistently deliver 4″ groups out of my rifle at 300 yards. More than adequate for even smaller game such as foxes and bobcats.

Zeroed at 200 yards, there is only 3 inches of drop at 250 yards and 9 1/2 inches 300. This is about an inch less drop than with Federal’s 115 grain fusion ammo. As you can see, the ballistic arch really takes a dive after 250 yards.  This is true of all 6.8spc ammo and is caused by the low ballistic coefficient of the lighter projectiles and low speed of the heavier loads.  This may not seem like stellar performance at first glance, but let’s compare this to Federal’s 150gr Fusion 30-06 factory load.  With the same 200 yard zero, at 300 yards the high speed load started at an advertised 2900 feet per second has 7.5 inches of drop, only 2 inches less. At 250 yards the drop is identical, at 3 inches.

Let’s also compare the ballistics to the 243. I consider these cartridges to be very close in practical use in regards to most hunting situations.  Sure, the 243 can be loaded with ultra sleek long range bullets that the 6.8 can’t, making it the obvious choice for long range shooting.  However, for the average hunter who isn’t taking shots much past 300 yards, the two cartridges are very similar both in terms of flight characteristics and their affect on game. A 100gr 243 bullet started at 2950 feet per second (most factory 243 rifles on the market are actually getting less than this, especially youth models with short 20 inch barrels) will have around 7 inches of drop, 2 1/2 inches less than the 90gr gold dot. As is plain to see, if low recoil and flat trajectories out to 300 yards is what you want, the 6.8spc is right there with the 243.

Enough with the ballistic jargon, what does it do to animals? The first critter to take a 90gr gold dot through the chest was a coyote. At an estimated 80 yards the coyote fell over without even twitching. Just bang, flop. The bullet hit high center shoulder and exited the left side. It made a nice clean hole, with a slightly larger exit. I shot a few jackrabbits with the load as well just for the challenge of shooting at running game. The cartridge, as to be expected, was a little much for the rabbits. A messy pop was an obvious indicator that I had hit my target.

My wife, Caitlin, and I each had a mule deer doe tag this year and she drew a doe antelope tag. We decided to put in for what should be easy tags because come hunting season she would be 8 months pregnant. This would give us a perfect chance to try the Federal ammo on some larger game.

Caitlin practiced for several weekends shooting the ammo at water bottles out to 300 yards. Confident in the ammo, we took it on our antelope hunt first. It was an easy hunt, and in no time she had a nice fat doe on the ground. The antelope was slightly quartering away at a laser ranged 240 yards. The bullet tore through the liver, the lungs, and even clipped the heart. We recovered the bullet on the far side, just under the hide, in front of the shoulder. The animal ran about 40 yards before she tipped over. As you can see in the photo, the bonded gold dot mushroomed perfectly and retained an intact shank. 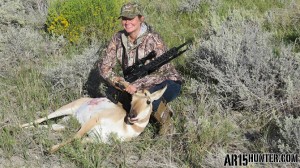 The author’s wife with her doe Antelope shot with the Federal 6.8 SPC Gold Dot 90 grain ammo

Next we took it on our mule deer doe hunt. My wife was using a different rifle and caliber for this hunt, but I would be using the 6.8spc shooting 90gr gold dots. After she dropped hers’ in its tracks with a neck shot, It was my turn to take one. After her shot the herd ran an estimated 100 yards or so and turned around to look. I took my doe at about 250 yards, but we did not verify with a range finder. After I shot, I could see the hit in the scope, but she did not fall over. I started to get concerned because I could not see one that looked sick or hurt. I could no longer tell which one was shot as the deer had moved. After a moment the herd started to leave the field. Then it was obvious which one was hurt as she was lagging behind the rest and stopping frequently. She made it a surprising 100 yards or so before she was clear of the rest of the herd and I decided to shoot her again. The doe stopped for a while and hung her head low. It looked like she was about to expire, but I didn’t want to take a chance. On the second shot she fell over instantly. 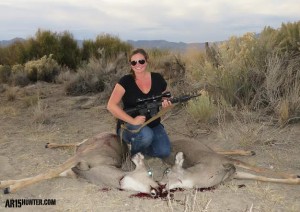 The Author’s wife with two Mule Deer doe, one taken with the Federal 6.8SPC with the 90 grain Gold Dot bullet

Upon examination, the reason for her resilience was obvious. My first shot was too far back. I was still in front of the diaphragm, but I had hit the very rear of the lungs. The liver was unharmed, no arteries were hit, and I didn’t break any ribs The bullet had passed between them. When only the very rear potion of the lungs are hit they don’t fill with blood as fast, and the animal does not bleed internally as much as they would with a more forward shot. I have seen this happen before with other animals shot in the very back of the lungs. She probably was about to fall over before I took the second shot, as her lungs were full of blood when we field dressed her. The bullet did exit and a very strong blood trail led from where she was first hit to where she finally died.

The second shot hit her high in the center of the shoulder. It smashed through both of her scapula as well as her backbone then exited. She was at 100 yards when the bullet impacted. Overall, I am impressed with this value priced ammo, that’s a lot of bone and muscle for a 90gr bullet to penetrate.

Federal does not advertise for this ammo much, if at all. Most of the press goes to their 6.8spc 115gr fusion offering. I have only ever found the ammo sold online and there is not a great deal of hype surrounding the bullet. A quick search online revealed ammo still selling at less than $20 a box and now factory seconds offered at around $17 a box. My conclusion? I’m ordering more! 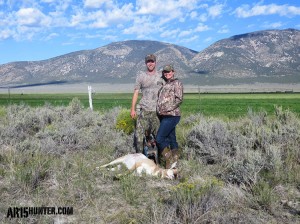 The Author and his wife with her 2014 Antelope

Editor’s Note:  Testing and Hunt Report on the Federal 6.8SPC 90gr GOLD DOT Ammo by Eric Verwoest. The custom built 6.8SPC upper was built by Verwoest Precision Automatic and includes a 16″ nitride treated 4 groove barrel with a 1 in 11 twist and lightweight profile. The upper was topped with a 3x9x40 Bushnell Elite 4200.

Eric Verwoest
Owner at Verwoest Precision Automatic
Verwoest Precision Automatic is a small, family run business. My wife has a passion for shooting guns & for myself, I really enjoy a good hunt. We want to provide you with the best of both worlds. Our AR's are great for hunting in heavy brush & timber as well as taking game at 700yds or more. We want to offer you an AR with the precision & versatility you've always wanted, with the customization you've desired.