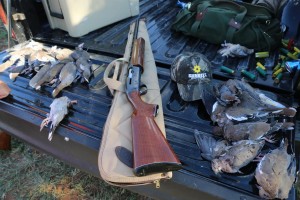 My West Texas Dove hunt was about to get interesting!

I made the yearly trek out to West Texas for the first weekend of dove season.  After a several year drought they have received some much needed rain and it showed.  The dove were plentiful and everyone was limiting out with a mix of white wings, mourning dove, and the invasive Eurasian Collared Dove were just bonuses.

As I was picking up a downed bird something caught my eye on the pond’s muddy edge.  Huge hog tracks!  Now my mind was focused from the birds to the hog that had made those tracks.  I was coming back after dinner to hunt this hog.

After dinner and sunset I started back to the pond.  There was a half moon and visibility was very good, so I drove the ranch roads with my third generation PVS-14 keeping an eye out for any movement.  A cold front had blown in dropping the temperature from 100 to 64 degrees.  Sixty four degrees feels pretty cold after a day of shooting in the 100 degree heat with the sun beating down on you.  It had me thinking of the winter and great hunts to come.  Right then, I spotted a huge, shaggy boar and he had already made me, staring right at me while I daydreamed of winter!  I slowly reached for my LWRC Six8 Razorback rifle, trying not to spook him in the process, but it was too late and he turned, disappearing into the mesquite brush.  My heart sank, because the chances of him returning were not good…

I started gathering my things to head back in, tomorrow would be another early morning of bird hunting.  As I stood I saw something coming towards me! It was another lone boar walking to the pond, right down a cattle trail.  I found the boar in my thermal scope, and when he reached seventy yards or so, I squeezed the trigger and heard the dreaded CLICK sound of an empty chamber!  In my hurry, I had not chambered a round.  The boar lifted his head and his ears perked up as I chambered a Hornady 120 grain SST.  I pulled up my rifle and looking through the Ratheon W1000-9 thermal scope, I found he was still there.  I squeezed the trigger again but this time there was a report from the suppressed Six8 rifle and a loud thud as the bullet entered just below the boar’s ear.  He dropped in his tracks, stone dead before he hit the ground.  This smaller boar ended up weighing 305 pounds.  Now the hunt is on for the monster boar that got away! 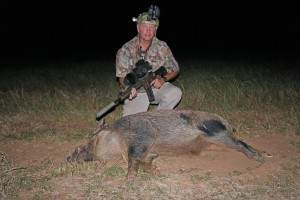 The author with a nice 305 pound boar taken after a West Texas dove hunt.