Many folks in the AR15 community know of Team Ranstad, and their yearly raffle to bring in funds to help their organization support the troops.  There are many groups that support our troops, but Team Ranstad is unique  in that they ship directly to specific units, and include needed equipment when they fill some requests.  More specifically, here is a line directly from their Mission Statement:

The history of Team Ranstad is interesting, but it is personal to many who have followed and supported their work over the years.

From their website, “It all started with two retired sailors, one of whom at the time had a son who’d just deployed to the remote mountains of Hindu Kush at Forward Operating Base (FOB) Naray in Afghanistan as a Sniper with the 1-91st Airborne Cavalry Recon Platoon. That sniper is Staff Sergeant Nick Ranstad, who set the U.S. Army record with a 1.3 mile confirmed kill using a Barrett M107 .50 caliber during that deployment.

During Nick’s deployment to Afghanistan the group started to send boxes to his platoon, one of our best efforts was Christmas 2007 which resulted in over 250 boxes for the Platoon of treats; equipment, nice to have stuff; goodies; etc., etc. This soon led the Platoon referring to us as “Team Ranstad”- if the guys needed anything, they said “ let Ranstad know … his Team” will help.”

We started this group to recruit for Team Ranstad as we could use all the help we can get and/or for those who would like to get directly involved in supporting our Troops and hopefully make life a little easier for them.”

Hopefully by now, you are interested in the group, and want to give to their cause!  If so, and you want to help, while also possibly winning a really nice prize, read on. 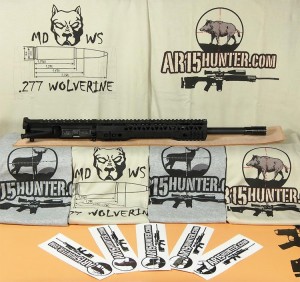 The .277 Wolverine Upper is Just One of the Many Prizes!

We were approached by Team Ranstad to see if we wanted to donate to their yearly raffle, which brings in a major portion of their funding for the year.  We jumped at the chance, and asked Mark, from Mad Dog Weapons Systems (MDWS), if he wanted to partner up with us for the donation.  He gave a resounding, “Yes”!  We decided on a complete .277 Wolverine upper, along with a box of .277 Wolverine ammunition (donated by JB’s Firearms, with some AR15 Hunter and MDWS t-shirts and decals.  All in all, it is a great prize for someone who only has to purchase a raffle ticket, or tickets, from the AR15.com Store (that links directly to their store, and the raffle ticket item) and you will have the chance at this, or many other GREAT prizes!  If you don’t get a chance to participate in the raffle, or want to give directly, please visit TeamRanstad.org and give through their site.

So go check out the Team Ranstad Raffle – Win A 277 Wolverine Upper and Support The Cause! 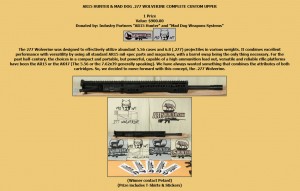