Predator Hunt Report From the Forests of Northern California

My name is Mark, and this is a recent predator hunt report from the forests of Northern California.

I arrived at my buddy Stan’s place just before sun up and we headed out to call some dogs.  This trip was a bit different for me because we were calling in the forest and I have always called in the desert or on cattle ranches. I wasn’t sure what to expect.

On the second stand we scored by calling in a double.  After about 10 minutes of calling, Stan whispered to me, “Do you seem em, there’s two!”  They were about 275 steps out and were not coming in any closer.  One of the coyotes just stood there staring at us, as the other one kept walking from side to side.  I told Stan that I was going to take the shot.  I was using my trusted Remington R25 in .243 caliber, with hand loaded 55gr Nosler Ballistic-Tip bullets.  I lined-up the crosshairs right above the front leg and boom went the dynamite!  After the shot, I saw the coyote laying down taking a dirt nap.  The other one wouldn’t stop moving, and then ran off, so I didn’t take a shot.  Afterwards I wished I would have though. Why not, right?! 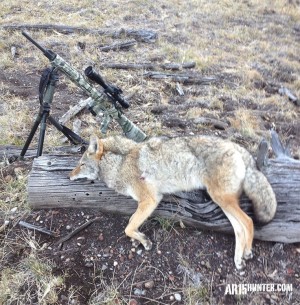 In total we saw 5 coyotes and called in four of them. On the other coyotes no shots were taken for various reasons. For example we had a dog inbound and the Foxpro just turned off.  Yup, just shut off.  The coyote was no longer interested and left the scene. On another stand a cow was in the way and so it goes…
Here are a couple of pictures from some other predator hunts with my Remington R25, in .243.  I’ve taken a lot of coyotes with it and no runners.  It’s just point and shoot, and follow up shots are pretty easy! : 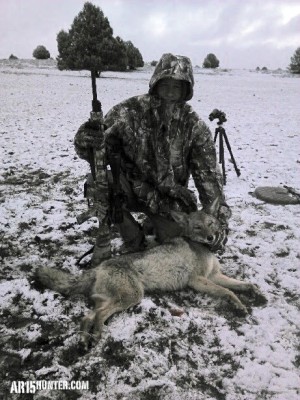 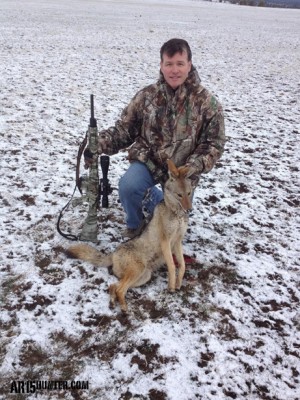 The author with a nice NorCal Coyote!

—–
Editor’s Note:  Be sure to check out Mark’s YouTube Channel (Click Here), for summertime action on ground squirrels, as well as more predator hunting, like this video of a “Coyote on the Run“.

Mark
Mark is an avid predator hunter from Northern California, who shoots dozens of predators a season.When he is not hunting predators, you can find him hunting other varmints throughout the northern part of the state.He often publishes videos of his hunt on his YouTube Channel linked above

Latest posts by Mark (see all)